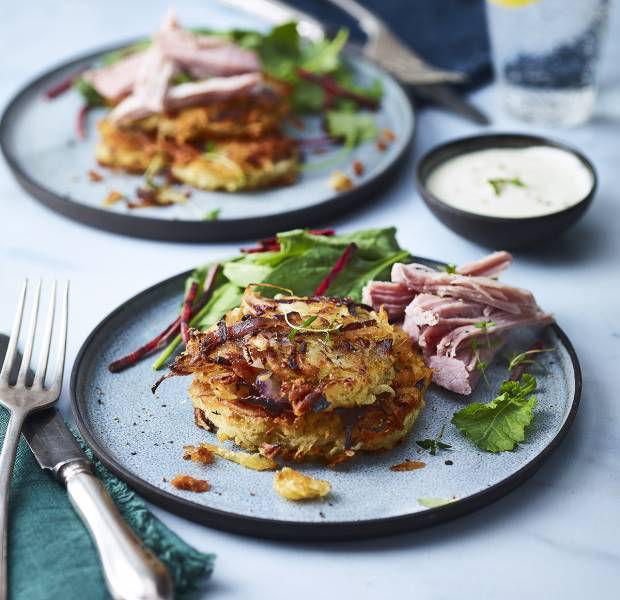 1
Start cooking the gammon about 8 hrs before you want to serve. Put it in a slow cooker with 600ml water, the chopped onion, garlic and 3 sprigs of the thyme. Cover, set to low and leave for 8 hrs, turning after 4 hrs if possible.
2
After 8 hrs, carefully lift out the gammon and set aside until cool enough to handle. Shred the meat using 2 forks. Return 300g of the gammon to the slow cooker to keep warm in the cooking liquid. Reserve the rest for other meals.
3
Grate the parsnips and potatoes into a clean tea towel and squeeze out the excess liquid. Tip into a bowl with the sliced red onion and leaves from 1 sprig thyme; season with black pepper.
4
Working in batches, heat some of the oil in a nonstick frying pan and add a few small mounds of the potato mixture. Press down with a spatula and cook for 3-4 mins on each side until crisp and golden. Set aside on kitchen roll while you cook the rest.
5
Remove the gammon from the cooker and serve with the rösti, salad and soured cream, garnished with the remaining thyme.