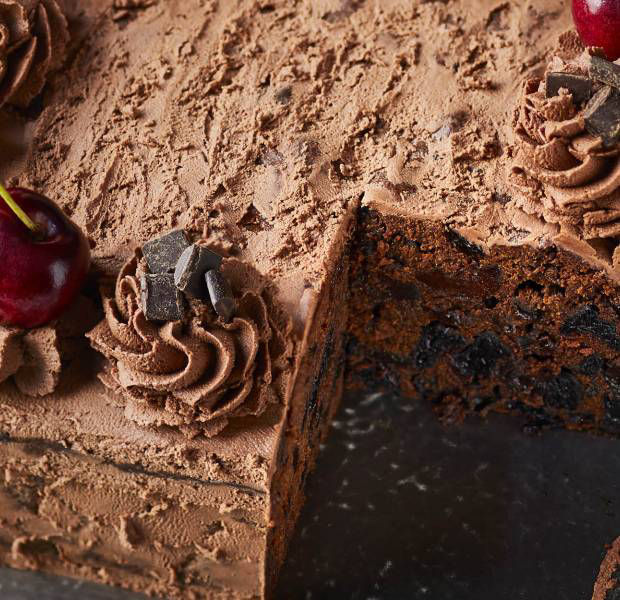 1
Put the dried cherries, raisins, cherries & berries mix and glacé cherries in a bow. Add the brandy (or tea) and stir once. Cover and set aside for 24 hours to soak.
2
Preheat the oven to 150C/130C Fan/Gs 2. Line a 20cm square tin with 3 layers of baking paper.
3
Sift the flour an cocoa together and stir in the almonds.
4
In a separate bowl, beat the butter and brown sugar together until light and fluffy. Beat in the eggs, one at a time, adding a rounded tablespoon of the flour with each of the last 2 eggs. Stir in the raspberry jam and the chocolate chunks.
5
Fold in the rest of the flour mixture, followed by the soaked fruit and any soaking liquid.
6
Put into the cake tin and level the top. Dampen your fingertips and pat all over the top - this helps prevent it becoming too hard as it cooks. Bake for 1 hr.
7
Cut 2 squares of baking paper measuring 20cm and cut a hole the size of a 10p coin in each. Lay them on top of the cake - this will prevent it browning too much. Reduce the oven to 140C/120C Fan/Gas 1 and bake the cake for another 2-3 hrs or until a skewer inserted into the centre comes out clean.
8
Remove the cake from the tin (keeping the paper on) and cool on a wire rack. When cold, remove the paper, wrap the cake in fresh baking paper and then foil. Store in an airtight container.
9
If you want to 'feed' the cake with cherry brandy, start a week after it has been stored. Unwrap the cake, pierce the top in several places with a skewer and drizzle over 2tbsp of the feeding cherry brandy. Rewrap and store as before. Repeat every week until the brandy has been used up.
10
To decorate, heat the jam until melted and brush over the top and sides of the cake.
11
Break 75g of the dark chocolate into squares and put in a bowl with 2tbsp cold water. Stand the bowl over a pan of simmering water and stir until melted. Remove the bowl and set aside to cool.
12
Beat the butter and vanilla until soft. Stir in the icing sugar until just mixed, then beat with an electric mixer until light and creamy. Beat in the melted chocolate. Spread most of the icing over the tops and sides of the cake. Put the rest in a piping bag with a large star nozzle and pipe rosettes around the edge.
13
Just before serving, roughly chop the rest of the chocolate. Arrange on top of the rosettes, alternating with the cherries.