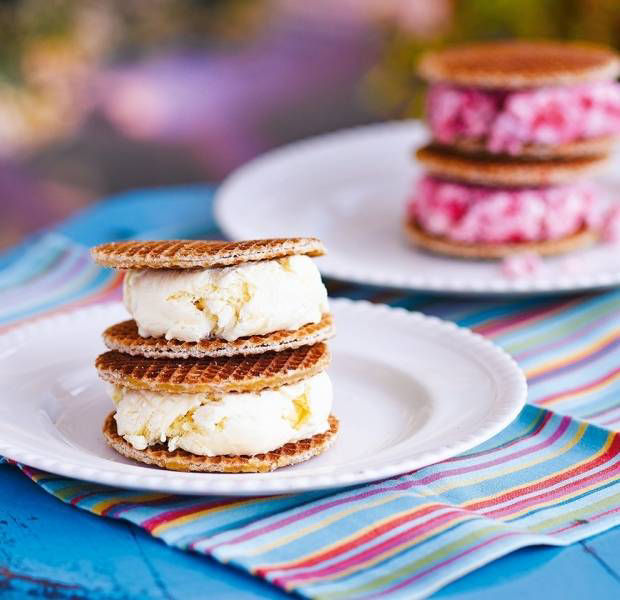 You won't be able to resist our heavenly ice cream. It's smooth, creamy and very moreish, and a doddle to make, too.

You won't be able to resist our heavenly ice cream. It's smooth, creamy and very moreish, and a doddle to make, too.

1
Separate the eggs, putting the whites in a large bowl and the yolks in a small bowl. Add 1 level tbsp icing sugar and the vanilla extract to the yolks and beat until evenly blended. Set aside. Using an electric mixer, whisk the egg whites until they form stiff glossy peaks. Add the rest of the icing sugar, a level tbsp at a time, whisking after each addition until stiff.
2
Whip the cream in another large bowl until it just starts to hold its shape. Take care not to overbeat it; if it's too stiff you won't be able to blend in the egg mixtures smoothly. When you lift the whisk out of the bowl, the cream should hang from it.
3
Fold the yolk mixture and the whites into the ice cream with a spatula or large metal spoon until just evenly blended, taking care not to knock the air out. Transfer to a plastic box and freeze for at least 7 hours.
4
Serve the ice cream alone or with fruit, sauce or as an accompaniment to your favourite dessert. Alternatively, sandwich scoops of ice cream between caramel wafers.

Note:
This recipe contains raw eggs and is not suitable for babies, toddlers, pregnant women and the elderly.

Ice cream variations You can make this ice cream in lots of flavours by adding the flavour during step 3.

Coffee Instead of vanilla, dissolve 3 level tbsp instant coffee granules in 3 tbsp boiling water. Cool, then add to the cream and fold.

Chocolate Reduce the vanilla extract to 1 tsp. Break up 150g dark chocolate in a bowl and stand over a pan of simmering water, making sure the base doesn't touch the water. Once the chocolate has melted, remove the bowl and leave until lukewarm. Add to the cream and fold.