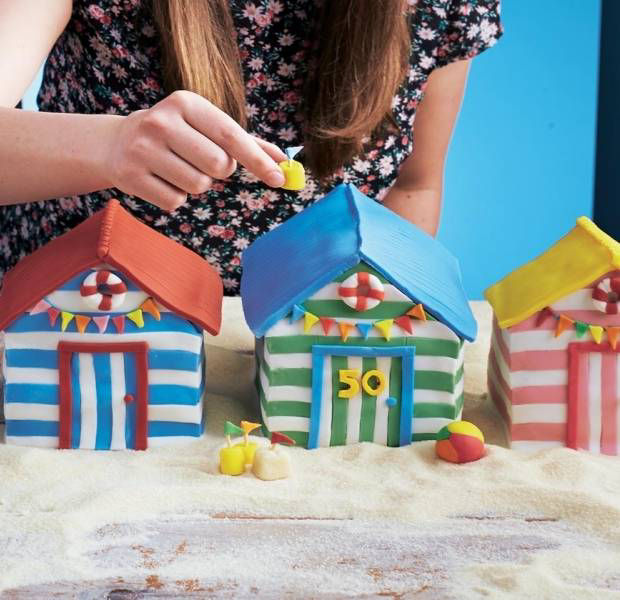 1
Pre-heat the oven to 180C/160C Fan/Gas 4. Lightly grease a 23cm square cake tin. Line the tin with baking paper - the butter will help the paper stay in place.
2
In a large bowl, beat 250g of the butter and 250g caster sugar with an electric mixer, until fluffy.
3
Beat in 4 eggs, one at a time. Add 300g flour, 1 tsp baking powder and 2 tbsp milk. Continue beating until evenly mixed.
4
Spoon the cake mixture into the lined tin and level the surface. Bake for 1 hour, or until the cake is golden and brown, and a skewer inserted into the centre comes out clean.
5
Leave to cool in the tin for 15 minutes, then turn out on to a wire rack. Leave to cool.
6
Using the remaining cake ingredients, repeat steps 2-5 to make a second cake.
7
Put the butter, icing sugar, vanilla and water in a large bowl. Whisk together, using an electric whisk, until it is a pale, fluffy buttercream.
8
Slice one of the cakes in half vertically. Sandwich the two halves together, one on top of the other, using 3 tbsp jam and 3 tbsp buttercream. Stand the cake on a board.
9
Slice the second cake in half vertically. Slice one of the halves in half again vertically. Cut one piece diagonally through the centre, from top to bottom, to get two triangle-shaped wedges.
10
Use buttercream to sandwich them together, crust-side down, to form a larger triangle. Using jam and buttercream, stick the triangle on top of the cake on the board, to form a roof.You will have a piece of cake left over - you can freeze it to eat later.
11
Spread the remaining buttercream all over the hut-shaped cake.
12
Lightly dust a clean surface with icing sugar. Knead the marzipan until soft, then roll out. Using a sharp knife and a ruler, cut out sheets of marzipan to cover each side of the cake. Stick in place and smooth. Wrap any leftover marzipan in cling film, to use later.
13
Roll out 225g green icing on a surface dusted with icing sugar. Roll out 225g white icing. Using a ruler, cut the green and white icing into 1.5cm-wide strips.
14
Lightly brush the sides and ends of the cake with boiling water. Lay alternate green and white strips of icing up each side of the cake, trimming at the corners to neaten. Wrap any leftover icing in cling film.
15
Roll out 250g blue icing. Cut out two rectangles large enough to cover the roof, with a little overhang at the bottom. Lightly brush the roof with boiling water. Stick the blue icing into place and smooth. Use the side of a ruler to mark on roof slats.
16
To make the bunting, rollout a selection of the mixed coloured icing and cut out small flag shapes. Pipe a line of blue piping icing from one side of the roof to the other, then fix the flag pieces in place.
17
Make a door from icing and fix in place with a little boiling water. Make a number, lifebuoy, door handle and door trim using leftover icing. Make sandcastles, a beachball and a seagull with the rest of the icing and marzipan.
18
Sprinkle a thick layer of golden caster sugar and crushed biscuit on the board around the cake, then add the sandcastles, beachball and gull.