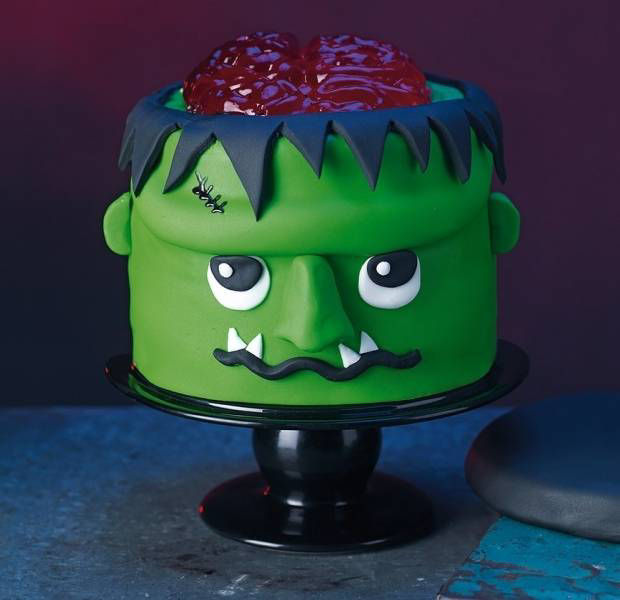 500g sifted icing sugar, plus extra for rolling out

1
Pre-heat the oven to 180C/160C Fan/Gas 4. Grease and line the bases of 2 x 19cm round cake tins. Beat together 125g of the butter and 125g caster sugar until light and creamy. Add 2 of the eggs, 2 tbsp milk, 150g flour and 1 level tsp baking powder. Beat until just evenly mixed. Divide between the tins and bake for 25 minutes, or until the tops spring back when lightly pressed. Transfer to a wire rack. Repeat the whole process twice, so you can make a total of 6 cakes. Leave to cool.
2
Break the jelly into pieces and put in a jug. Add 300ml boiling water and stir until melted. Stir in 300ml cold water. This will make an extra-firm jelly that holds its shape well. Pour the jelly into the brain mould. Leave in the fridge for at least 3 hours to set.
3
Beat the icing sugar, 250g butter and vanilla together to make a soft, fluffy buttercream. Put one of the cooled sponge cakes on a board and spread the top with the buttercream.
4
Layer another 4 of the cakes on top, spreading buttercream between them but not over the top cake. Cut a shallow round hollow out of the top cake, then spread buttercream over the hollowed-out sponge and edges. Set aside the sixth cake to use later.
5
Set aside 8 tbsp of the buttercream. Spread the remainder evenly over the sides of the cake stack.
6
Knead together all the green icing. On a surface lightly dusted with icing sugar, roll out 190g of the icing into a 20cm circle, then carefully lay it over the top cake and smooth down into the hollow and over the edges.
7
Roll out another 80g of the green icing to make a 20cm-long sausage. Press it onto the front of the cake about a third of the way from the top, then shape to form the monster's brow.
8
Roll out 215g of the remaining green icing and cut out a rectangle 15cm x 30cm long.
9
Carefully wrap the icing rectangle around the front of the cake, moulding it over the brow. Pinch the top edges together to seal. Set aside another 50g of the icing, for the nose and ears. Knead together the remainder, including any trimmings. Roll out another 15cm x 30cm rectangle, to cover the back of the cake.
10
Shape a nose and ears from the remaining green icing. Fix in place with a few drops of water to make them stick.
11
Roll out the white icing. Cut out 2 circles for eyes. Fix in place with a little water. Add smaller black icing circles for irises, then put tiny white icing dots on top. Roll a bit of black fondant into a worm shape for the mouth. Cut white triangles for fangs and fix in place with the mouth.
12
Spread buttercream thinly across the top and just over the edges of the sixth cake – this will be the separate, cut-off bit of the head. Roll out half the black icing and use to cover the cake and just over the edges. Turn the cake over and spread the rest of the buttercream over the bottom. Roll out more black icing and use to cover the base. Trim and smooth around the edges.
13
Knead all the black icing trimmings together. Roll into a 30cm x 6cm strip. Cut zigzags along the strip to make the hair. Dampen one side of the strip and fix round the top of the head. Repeat, to make the rest of the hair.
14
Draw scars with black writing icing. Cover the hollow in the top of the head with a circle of cling film, then tip the jelly out to sit in it. Arrange sweets on top, if using. Serve the cake with the separate cut-off top of the head beside it. Remove the cling film before eating.