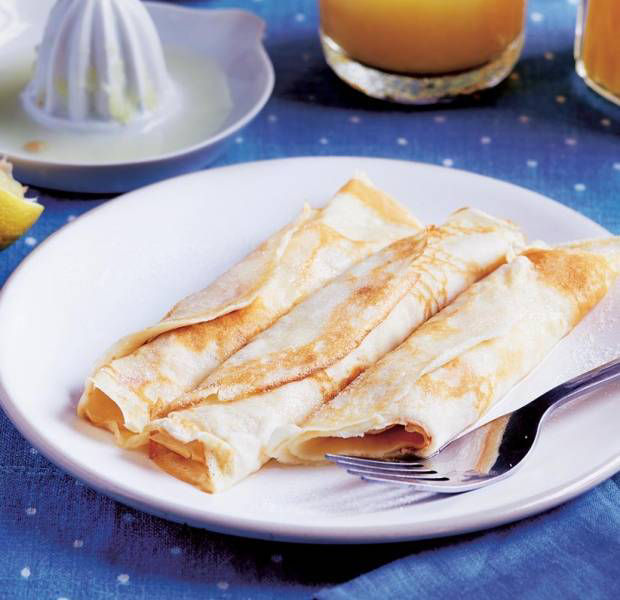 Pancake Day began as a way to use up eggs, butter and milk before Lent. In the UK, it’s a tradition to hold ‘pancake races’ – running while tossing pancakes.

Pancake Day began as a way to use up eggs, butter and milk before Lent. In the UK, it’s a tradition to hold ‘pancake races’ – running while tossing pancakes.

Quarters of lemon, to serve

1
Sift the flour into a large bowl and add a pinch of salt. Make a well in the centre and then break in the egg. Add about 70ml of the milk, then beat with a wooden spoon. Gradually draw in the flour from the sides as you mix, adding the rest of the milk, a little at a time, to form a thick batter.
2
Pour the batter into a jug. If you have time, cover it with cling film and leave for 30 minutes – this allows the flour grains to swell, which makes the pancakes lighter.
3
Grease a small, non-stick frying pan with oil. Wipe away any excess oil with kitchen roll. Heat the pan over a medium heat.
4
Stir the batter, then pour enough in the pan to thinly cover the base, swirling it around to coat evenly. Cook until the underside is brown, then flip it over with a palette knife – or toss it if you’re feeling brave. Cook until the other side is golden brown, then slide the pancake on a plate. Cover with a clean tea towel, to keep warm. Repeat with the remaining batter.
5
To serve, sprinkle on a little sugar, add a squeeze of lemon juice, then roll up.