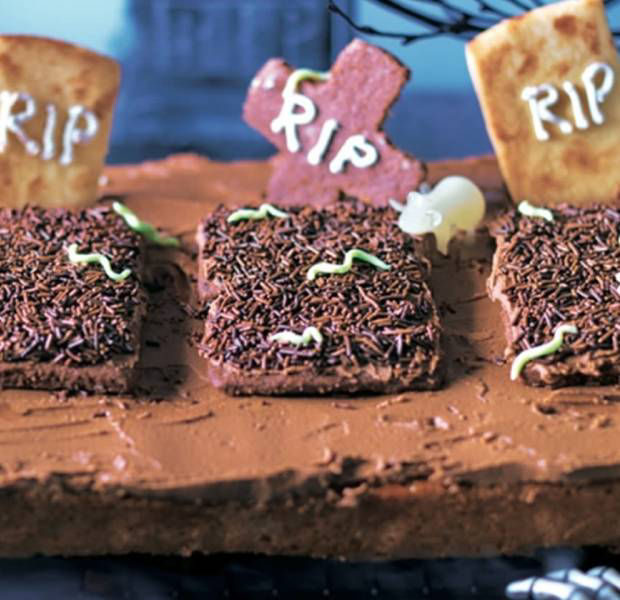 It's fun making this from scratch, but to save time, you could use Asda Malted Milk biscuits for the headstones.

It's fun making this from scratch, but to save time, you could use Asda Malted Milk biscuits for the headstones.

1
Pre-heat the oven to 180C/160C Fan/Gas 4. Line a 23x32cm roasting tin with baking paper. Beat 250g butter until really soft. Add 250g caster sugar, the eggs, self-raising flour, baking powder and 2 tbsp of the milk. Beat together until evenly mixed and creamy.
2
Put in the tin and bake for 40-45 minutes, or until the top springs back when lightly pressed. Cool on a wire rack.
3
For the biscuit headstones, mix 115g butter with 50g of the caster sugar. Divide into two equal portions and add half the plain flour and the cornflour to one portion, and the rest of the flour and the cocoa to the other. Mix until just evenly blended. Pat each piece of dough into a flat block, wrap in cling film and chill for 15 minutes.
4
Roll out each piece of dough between two sheets of cling film, to the thickness of a pound coin. Cut out rectangles and crosses using Asda cutters. Lift onto baking trays and bake for 10 minutes. Leave to cool.
5
For the chocolate butter icing, melt the chocolate in a heatproof bowl and stand it over a pan of simmering water (the base of the bowl must not touch the water). Cool until tepid and still as a liquid. Beat 150g butter until soft and then gradually add the icing sugar. Add 2 tbsp milk and the melted chocolate, and beat until light and creamy.
6
Spread the top of the cake and three rectangle biscuits with the chocolate butter icing. Sprinkle the biscuits with chocolate sprinkles and put on the cake to represent graves.
7
Dust two light-coloured biscuits with cocoa and one dark one with icing sugar. Pipe 'RIP' on each and put on the cake, along with worms made from rolled-out icing. You'll have biscuits left over, which can be served separately.